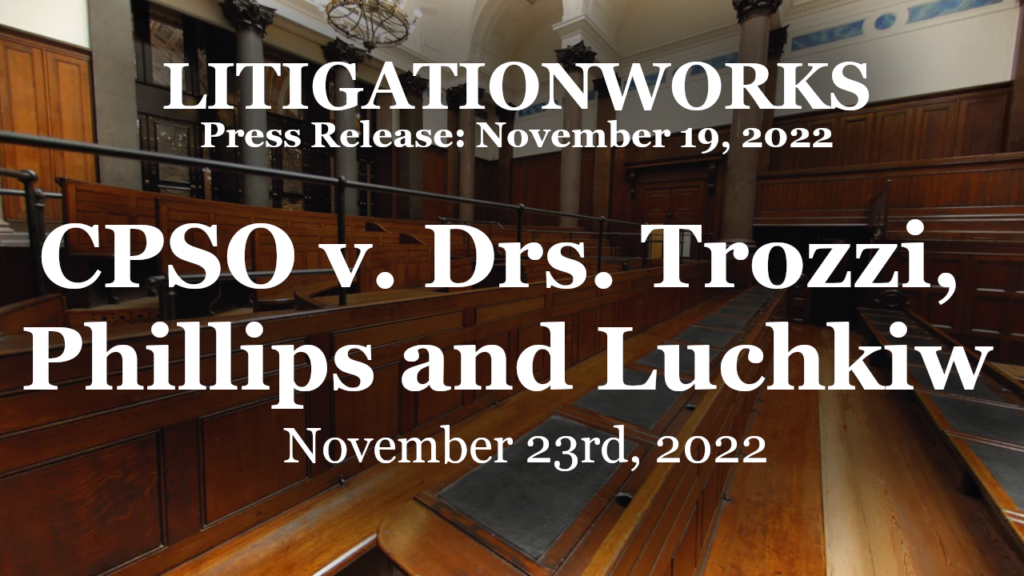 College of Physicians and Surgeons of Ontario v. Drs. Trozzi, Phillips and Luchkiw

Thanks to the volume of requests for the link to the motion hearing, the Tribunal has made the livestream link public: https://www.youtube.com/watch?v=xS4A2z4UogY

Michael Alexander, counsel for Drs. Mark Trozzi, Patrick Phillips and Crystal Luchkiw, announced today that the Discipline Tribunal of the College of Physicians and Surgeons of Ontario (CPSO) has granted his clients an unprecedented opportunity to challenge the College’s efforts to dictate how doctors should practise medicine in relation to Covid-19 in a motion hearing that will be held at 9:00 am on November 23rd.

For the last year-and-a-half, the College has been investigating and prosecuting doctors based on three restrictions on the practice of medicine: doctors shall not say anything contrary to public health orders and recommendations regarding Covid-19, shall not write medical exemptions for Covid-19 injections except in extreme circumstances, and shall not prescribe alternative medications such as ivermectin for the prevention and treatment of Covid-19.

Drs. Trozzi, Phillips and Luchkiw will challenge these restrictions on the ground that the College lacks the legislative authority to impose them on doctors and patients. Further, they will argue that the restrictions themselves violate the fundamental rights that they and their patients enjoy under the Canadian Charter of Rights and Freedoms, namely the guarantees of freedom of expression, and life, liberty and security of the person. Under the latter, the Supreme Court has ruled that all medical decision-making must be based on the principle of informed consent. The doctors assert that the restrictions have essentially extinguished both rights, as well as the right of doctors to practise medicine based on their own clinical judgement in consultation with their patients, which is the prerogative of the medical licence.

As well, the doctors will argue that the College’s investigation orders, which have put them on the road to discipline hearings, failed to meet the legal standard of reasonable and probable grounds, and thereby authorized unlawful fishing expeditions. Acceptance of this argument would mean that the College’s prosecution of the three doctors would come to an end.

Commenting on the pending hearing, Mr. Alexander stated: “As far as we know, this is the first time that the College Tribunal has been asked to rule on the jurisdictional and constitutional validity of College prosecutions prior to a discipline hearing. The hearing is also unique in that it brings together doctors facing separate discipline hearings in one motion hearing to deal with fundamental legal issues common to all their cases.”

Alexander also stated: “For the most part, these issues have not been raised in the past in the context of discipline hearings because the insurance lawyers at the Canadian Medical Protective Association, who normally represent doctors in College proceedings, do not, as a matter of policy, challenge the College on jurisdictional or Charter grounds. Most doctors don’t know this, which is a tragedy we hope to remedy on Wednesday.”

Finally, he added: “Many of the problems to be addressed in this hearing are hiding in plain sight, and the legal solutions for them are also evident. I am hoping that the panel will see fit to apply the law as it is as opposed to what the College wishes it were.”

Thanks to the volume of requests for the link to the motion hearing, the Tribunal has made the livestream link public: https://www.youtube.com/watch?v=xS4A2z4UogY