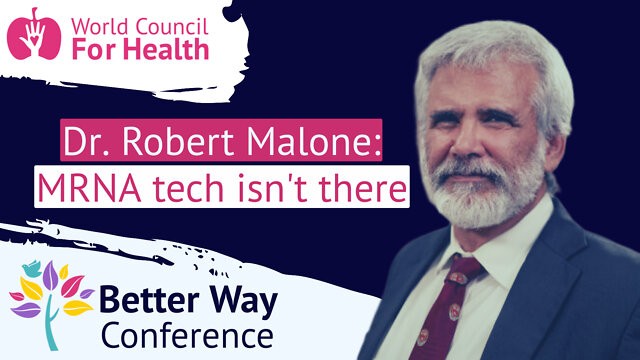 mRNA tech pioneer Dr Robert Malone briefs us on the WEF, a trade organization with a fascist dream, who are also lying about mRNA technology.

Speaking on the first day of the WCH Better Way Conference, veteran mRNA technology scientist Dr Robert Malone explains that the technology is not nearly as advanced as the WEF and their accomplices in the covid crimes against mankind are claiming.

The WEF is a trade organization of the 100 most cash and asset stuffed corporations in the world: plump piñatas for criminal and civil lawsuits.

The WEF has trained many operatives and embedded them in government and institutions around the world including tech, media, currency, banking etc. They are intentionally inserted there to serve the 100 corporations that make up this trade organization which is the WEF. The WEF is not a government, it is a trade organization that infiltrates and manipulates governments and other institutions. This is war and they are the enemies of free and lawful mankind.

Notorious fascist Musselini stated that “fascism should have been called corporatism”. Fascism is the fusion of the interests of the state and the corporation.

WEF founder, Klaus Schwab’s “intellectual brainchild” is “stake holder capitalism”. This model places business at the middle of a flower, with our supposed governments being just just one of it’s many pedals. That’s fascism!

The 100 richest corporations, through their WEF trade organization are striving to assemble and impose their fascist rule on the entire world. This, above all, we must stop; and there isn’t time to waste.

Despite the lofty offices that they infest, lets boldly report the crimes of covid agenda perpetrators, many of whom are WEF operatives, to police. We must insist, persist, work in groups, and be creative.

One such focus of proper and lawful criminal charges, is against federal, provincial and state government and health agencies and the top ranked leaders in these institutions. Officials are guilty of crimes causing mass death and suffering, anywhere that they have obstructed safe and effective treatments of covid like ivermectin (see: one, two, three, four); and anywhere that they have suppressed doctors or others from speaking their opinions against the forced injection. These injections are not safe.

The same holds for the leadership in the medical regulatory bodies such as Colleges of Physicians and Surgeons in Canada, who have suppressed safe and effective treatments, promoted dangerous ineffective misrepresented injections, and unlawfully persecuted and slandered  physicians who tell the truth, treat covid, or do not support the record-killing injection campaign.

Also serving the WCH Cease and Desist Declaration regarding the injections remains vital.

As Dr Paul Alexander has stated, “It is time to lock them all up!”

Let’s fight like our lives and freedom depend on this: because they do.