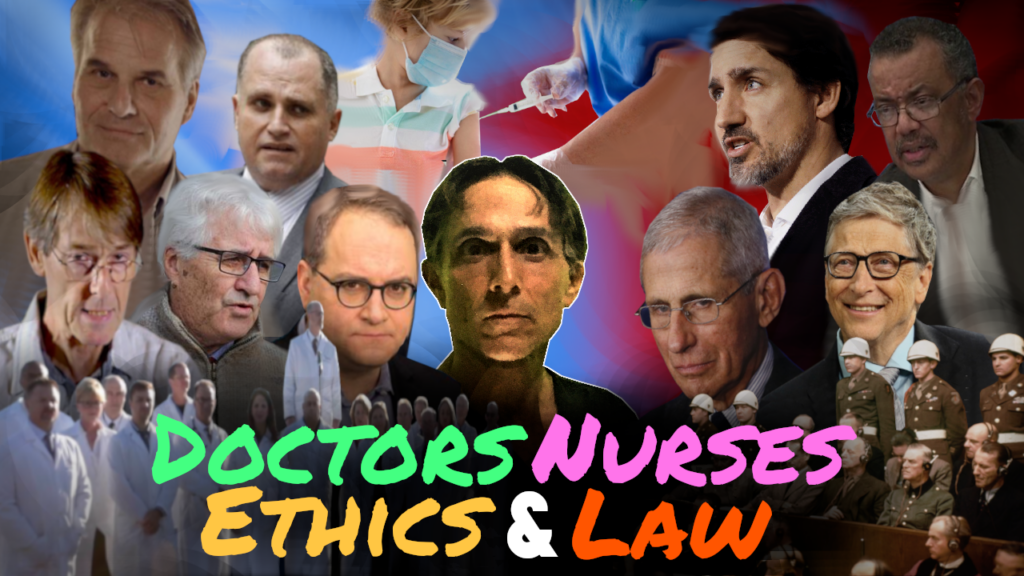 Ethical and financial conflicts faced by doctors, nurses, and other health care professionals in the context of what many consider to be the "Criminal Covid Enterprise".

Let us discuss the ethical and financial conflicts faced by doctors, nurses, and other health care professionals in the context of what I, like many, consider to be the “criminal covid enterprise”.

In a healthy society, one should not be in conflict to simultaneously follow: their own ethics, morals, professional oaths, and institutions’ rules, while avoiding participation in any criminal activity. Unfortunately, society is not always healthy, and now is a powerfully sad example of that.

I want to stress that I empathize with my fellow doctors, nurses, and allied health professionals. While I do not have any easy answers, I will explore the subject, and share my personal conclusions and decisions. I am not suggesting that everyone can or should follow the exact same path through this crisis as I am; or that there are easy answers, especially considering financial pressures and the need to provide for one’s family. I am very aware that we all face tough decisions in our current context.

I would also not endorse denial of the problems, or blind faith in institutions. Many institutions that we should be able to trust, have rightly lost the trust of many people, who have rejected propaganda, and done their own diligent research.

During the Second World War, the Nazi’s performed horrific torture and mutation which they called “medical experiments” on imprisoned groups, most notably the Jewish people. Following the war, international groups worked to avoid such experimental abuse of people in the future. In the face of the horrid evidence reviewed by the court during The Doctor’s Trial of 1947, a set of research ethics principles for human experimentation was adopted by the medical profession, becoming known as the Nuremberg Code. It was declared that medical and human experimentation must observe certain basic principles to satisfy moral, ethical, and legal concepts.

The ten principles of the code were given in the section of the verdict entitled “Permissible Medical Experiments”:

In 1964, the World Medical Association (WMA) adopted the principles and developed the Declaration of Helsinki as a statement of ethical principles for medical research involving human subjects, including research on identifiable human material and data. These principles still govern all medical and experimental research, treatment, and medication administered on human beings today. Contrary to this, government leaders and non-elected, privately funded, legally registered societies, acting as supranational organizations like the WHO, have ignored ethical, moral, and legal laws and principles that oppose violations such as forced experimental viral messenger RNA injections.

Relating to the Nuremberg Code, let us consider two questions.

First, are the modified viral messenger RNA injections which are being called “vaccines” experimental? They have emergency use authorizations in the USA but are not FDA approved. Such injections have never been administered to patients before. After reviewing much of the literature, I personally believe, like many experts, that these injections are experimental.

The FDA agrees. In the FDA’s reissuance of emergency use authorization letter to Pfizer dated Dec 23, 2020, it states near the top of page 2, “It is an investigational vaccine not licensed for any indication.” This is clearly an experiment; but are people being told that they are voluntarily entering an experiment, and clearly consenting? No, they are being told that they are getting a covid-19 vaccine.

Based on this, if I administered this injection to a patient as a simple “vaccine”, without making it very clear to the recipient that this is an experiment, then I would find myself guilty of violating the first principle of the Nuremberg Code. That is a very serious crime!

Also, given the very low mortality rate of Covid-19, and my impression shared by many experts, that we have likely achieved herd immunity many months ago, I think I would be involved also in a violation of principles 2 and 6 of the Nuremberg Code.

Also, if we consider the severe adverse effects of prior use of coronavirus experimental vaccines in laboratory animals, violation of principles 3, 4 and 5 are also at issue here. https://journals.plos.org/plosone/article?id=10.1371/journal.pone.0035421

Principle 7 is also violated, as these experimental subjects are just sent home after the injection, with no safety net for the experimental injection’s side effects.

Principle 8 is at least in question. Is this all being “conducted only by scientifically qualified persons.” with ” The highest degree of skill and care… through all stages of the experiment”? I think not.

Generally, I do not oppose institutional rules and procedures, and I want to cooperate and follow them wherever I work; but, even more, as a medical doctor, I do not want to be part of unethical medical experimentation on human trial subjects, only because it is being propagated by politicians and ill-guided media. It would violate the Nuremberg Code and amount to committing crimes against humanity.

Second, we should consider the PCR “test” as it relates to the Nuremberg Code. If people are forced to comply with an invasive procedure in order to enjoy their Charter Rights and Freedoms, or to keep their jobs, then we certainly cannot consider this voluntary consent (Principle 1). By its very design and as proven in independent laboratory tests of the PCR-Test kits, the test can neither detect the specific SARS-CoV2 virus, or the viral load used to predict if the subject is an infectious carrier. It violates principal 2 of the Nuremberg Code, which demands that it will “yield fruitful results for the good of society, unprocurable by other methods or means of study, and not random and unnecessary in nature”.

Likewise, probing through someone’s nasal passage into their nasal pharynx carries a risk of injury, especially when conducted by inadequately qualified technicians. The way PCR tests are being conducted clearly violate principle 7, but also principles 3, 4, 5, 6, 8, 9, and 10.

Attributed to the ancient Greek physician Hippocrates, this famous oath had to be taken by aspirants for medical school in ancient Greece, before they were admitted into medical school, because the Greeks knew that these people would learn how to heal but likewise how to harm and potentially kill people. Nowadays it is taken by graduates at the end of medical school before they enter independent medical practice. It includes this phrase:

“I will follow that system of regimen which, according to my ability and judgment, I consider for the benefit of my patients, and abstain from whatever is deleterious and mischievous.“

According to my judgement, and after careful consideration, I do not consider experimental viral messenger RNA injections, PCR “tests”, excessive and inappropriate use of masks, social isolation, state mandated germophobic behavior, and various other elements of the current covid practices, to be “for the benefit of my patients”.

So here again, we find a conflict. The WHO organization, which has not earned my trust, mandates policies to compliant governments, who mandate policies to hospitals and medical clinics.  It is a top-down roll out, from a top which my research reveals to be unworthy in my judgement.

Though I have always found hospital policies very reasonable and have been grateful for their creation, I now find conflicts between them and the Hippocratic Oath.

We live in a diverse society which until recently honored individual rights and freedoms including freedom of religion. Though we have diverse historic and religious backgrounds, all reasonable religious and philosophical schools endorse the Golden Rule:

“Do unto others as you would wish to have done unto you.”

As it is my conclusion that many of the protocols relating to covid 19, are not in the best interest of the patients or populace, and I do not want them for myself, therefore I can not endorse or participate in their execution without violating the highest and most fundamental law that I recognize, the Golden Rule.

Sorry I do not have a generic easy answer to that question. I recommend careful consideration, diligent research, and prayerful contemplation.

There is a fundamental maxim of law which states that when faced with two laws which contradict each other in a given situation, one is to follow the higher law in derogation of the lesser law.

Personally, I have had a long and very positive relationship with multiple hospitals and institutions. I enjoy my work. I would like to continue it, or at least return to it, after we resolve the current geopolitical crisis and abuse, and return to the rule of ethics, morals, and laws that serve each individual human being.

I understand the top-down roll-out of the situation, and sadly I do not anticipate medical institutions doing anything other than comply unquestioning with the ruling governments’ public health policies.

I hope we are creating remedies to our situation at the levels of legal and social justice and correcting public policy to return towards societal health.  That is why I support charges of crimes against humanity, as well as class action lawsuits against the perpetrators of the criminal covid-19 enterprise. (See German Coronavirus Investigative Committee, Dr. Reiner Fuellmich, Michael Swinwood, Elders Without Borders, Rocco Golati, and other legal experts  working on this task)

Personally, I must comply with my understanding of morals, ethics, the Hippocratic Oath, and the Nuremberg Code. Meanwhile, I have chosen to avoid conflict with the institutions where I have loved working for years, by resigning from them for the time being. My hope is that together, we will succeed in righting what is wrong. Then I can look forward to returning to my career, without these current conflicts. To do this, I have sold my house, down-scaled my family’s existence greatly, and committed myself to doing what small but significant part I can, hoping we will win this David-vs-Goliath fight; then I dream of returning to sane conditions in the health care sector, and my career as an emergency doctor.

Bill Gates, Big Pharma, WHO, PRC dictators, and many corrupted politicians together have a lot of resources and current power; but we have the truth. They are promoting lies, and a criminal enterprise.

What I wish for my fellow doctors, nurses, health care workers and all people is: spiritual calmness, mental clarity, self-awareness, self-determination, and a shared path forward that will help all of us to remedy the current sad situation.